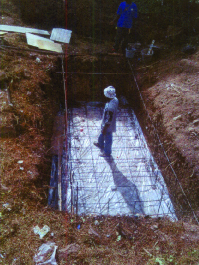 While donating books to the students at the Harvey Vale Government School, the Vice Principal, Mrs. Thieria Mills, was asked what her biggest obstacle was in educating the students. Without hesitation she stated that it is very hard to get the children to school on a routine basis due to the old and falling septic system.

The school often had to close for several days or weeks while the system was temporarily repaired. This resulted in the students missing a substantial part of the academic year. The school did not have the funds to pay for the repair and despite requests to the government the system was not repaired.

Upon hearing this we rushed to action. Since we had recently raised money to help Paul Caton and his eye surgery, we knew we had money remaining and we were looking for another project. What a great way to make a huge impact on the education of many children by replacing the septic system at the school. We contacted The Ashby Windward Foundation to see if replacing the septic system would be an option.

After much legwork by The Ashby Windward Foundation, we were able to fund the replacement of a septic system at the Harvey Vale Government School. The students started the 2010-2011 academic year with a fully functioning septic system.  The ability to attend school on a daily basis will make a huge difference in the lives of hundreds of students for years to come.